When it comes to Android mobile gaming, the company first comes to mind is Gameloft, not only by the number of titles that have been released, but the quality of them.

Founded in 1999 and with more than 200 titles to his credit, the French company develops and adapts games for both Android and other platforms such as iOS, Symbian, Bada, BlackBerry OS, BREW, iOS, Java and Windows Phone.

Undoubtedly Nova 3 is one of the most popular games of the moment, and probably has the best graphics. This first person shooter is the third installment of the futuristic NOVA and has some aesthetic similarities with the famous title of Halo PC.

Nova 3 is the best shooter uncontested moment and the best title of Gameloft, once you try it you will know exactly what I’m talking about. The variety of enemies, the details of the scenarios, the frantic action and music make this title the king of the best games of gameloft!

Asphalt 7: Heat is, in my opinion, the best racing game I’ve seen to date. If you like racing, this is the game for you. Everything in this title is excellent, cars, scenarios, missions, the graphics, the soundtrack. It’s really one of the best games that Gameloft has released.

In Asphalt 7 you can feel all the speed and the best effects of this series of games. In this new version, you can drive more than 60 vehicles from major. 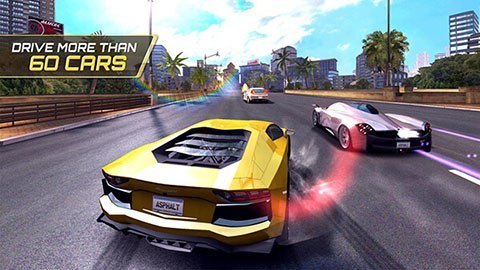 Modern Combat 3: Fallen Nation is one of the best first person shooter that has a soundtrack that resembles any Hollywood action film which along with its excellent graphics makes this game a unique experience. In the call of duty for their style cooperative game play. The 13 levels of the game will take us from Los Angeles to Pakistan, and we will have several game modes, as escort, destroy, helicopter or 4X4 hunting.

One of the most recent titles released by Gameloft is Wild Blood, an action game in the third person set in a medieval fantasy world where we have to handle large and heavy weapons to us through countless demons and enemies.

Wild Blood puts us in the shoes of Sir Lancelot, noble knight whose lady is kidnapped by King Arthur who is under the influence of Morgana, the evil sorceress. In our journey through Avalon and company have the invaluable help of Sir Gawain, a knight of the round table.

Its graphics are the best that can be found on mobile devices because Wild Blood is the first title published by Gameloft using Unreal Engine 3. The effects of light, shadow and detail characters and scenarios make this game a unique experience.

As its name implies, The Amazing Spider-Man is a game based on the film released in 2012 directed by Marc Webb and starring Andrew Garfield and Emma Stone. This game has a plot similar to the film and offers a great city to explore with graphics that are the best.

The Amazing Spider-Man is an action game in the third person that offers a dynamic, not only in the struggle, but also the movements of the characters through the huge Manhattan which is divided into 5 districts: Central Park, Business, Centre, Harbour and the residential area.

To circumvent the more than 25 missions rocking the swing will have to go through giant buildings with stunning graphics. Its gameplay is very convenient because we only have 4 buttons for the fighting and displacement of Spider-Man is very intuitive and fluid.

Home Improvement is Essential for Keeping Your House Attractive

Why You Should Be Working With ReactJS